We’ve been in a cycle of prototype – play test – bug hunt which any designer knows well, for it is the circle of life. It moves us all. Through despair, and hope, on the path unwinding. Or was that unending? Anyway here’s my illustration of the cycle of unnatural selection: 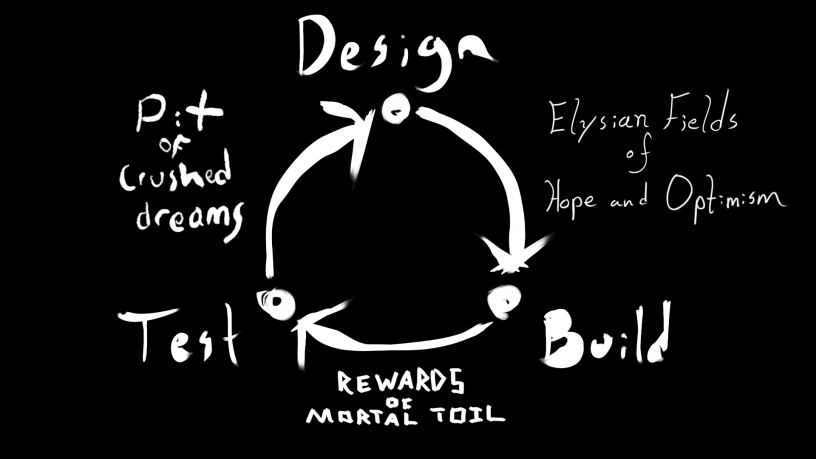 But now we’ve settled on the core mechanics. Tastes like victory!

So we’re taking a step back to design out all the bits and pieces of the game and its systems:

We’ve already worked on almost all of these to some degree, and with results we’re very happy with. But the time has come to lay out the grand vision and make sure everything lines up. So this week we’re drinking even more coffee than usual.

Once we’ve finished the big design discussion Reinan will begin a sprint of systems implementation in the code and I’ll get started on the Character model and animation because those are both things we can’t help each-other with.

So next up for me, blunder my way through the brambles of design – build – testing the character concepts I have in mind. It’s nice to start from scratch on these sorts of projects because your wild optimism means you have no idea how much work it’s going to be.

You need that optimism. It’s a critical resource. The whole cycle is fueled by it. To keep mine up, I focus on small victories, make sure to get enough sleep at night, and rabidly consume speculative art (including video games). It’s one of the things I think games are good for, in principle if not always in practice: offering an empowering experience to help you think better of yourself and future prospects. Sure that can become an addiction, but it might also be a critical service. So much the better if you can stretch your mind, expand your field of experience, and maybe even learn something along the way.

So what do you think? Can game playing help the design cycle and improve our lives in ways beyond escapism and entertainment?