They only define it.

We’ve overcome our challenges with normal mapping of simple assets, and on that subject I have some thoughts. Since writing them helps me wrap my head around the process, here you go: 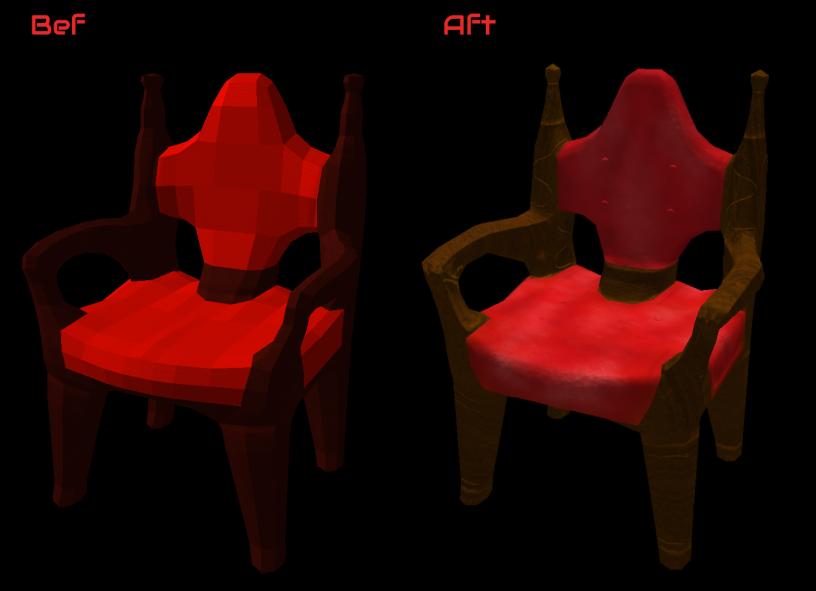 When planning to use normal mapping to create the illusion of high poly count on low poly assets my preference has been to build for the low poly asset first, then duplicate the low polly asset and add the additional topology to the second object. I’ve experimented with the opposite (building the high poly first, and the low poly under it) but I find the process of poly reduction to be far more tedious than that of detailing. Since keeping our momentum up at the office is largely a function of staying motivated, edging out tedium wherever possible is a huge deal. Even a tiny reduction in tedium can translate to a considerable momentum gain just based on morale (this constituting my critique of Monroe’s 1205th axiom).

The trick is, Normal Maps can’t change the low poly object’s actual topology – they can give the appearance of smooth edges, of internally shadowed texture, and even concave or convex extrusions so long as those extrusions don’t need to parallax, or affect the silhouette. Don’t make a high poly asset with a different silhouette!

My process goes as follows (working in blender 2.63A):

Things to bear in mind:

There are a lot of steps and little bits, but the results are extremely satisfying, and the work tends to fly by. Actually it’s kind of scary how quickly the time flies by. What day is it anyway? Is it day or night? Have I eaten? Well, anyway, back to work.